The Health Benefits and Uses of Tikta Ghrita Tikta Ghrita is translated as “bitter ghee” and it is precisely this, ghee infused with the most powerful bitter herbs that Ayurveda has to offer.  Due to the extreme bitterness of this medicine, Tikta Ghrita is mainly used for treating Pitta disorders such as eczema, psoriasis, rash, excessive heat in the blood, liver disorders, and inflammation of all kinds.  It is an excellent tonic to take routinely during the hotter seasons to ward away imbalance, or during detox programs to flush our toxins.

The main bitter herbs in Tikta Ghrita include Neem, Kutki, Kalmegha, Bhumyamalaki, Turmeric, Daruharidra, Karella (bitter melon) and Musta among many others.  Although these herbs all have their own unique actions, they do possess similar qualities such as being detoxifying, cooling (mostly), reducing (catabolic), anti-bacterial, anti-inflammatory, and act specifically on the liver and blood.  Taking these bitter herbs infused into the ghee not only increases their potency due to the synergy of the herbs working together; but also because of the catalytic effect the ghee provides, as it works to drive the herbs deeper into the targeted tissues.

Tikta Ghrita is a traditional Ayurvedic formula that has been utilized for thousands of years.  It is a vital part of any Ayurvedic cleanse during the “oiliation” phase, as it lubricates the internal body and pulls deep rooted toxins from the tissues.  Although Tikta Ghrita is used in larger doses for a cleanse, it can also be taken in smaller doses on a daily basis for the treatment of a variety of disorders or simply for the routine maintenance of the system.  Tikta Ghita is often used for liver disorders, inflammatory conditions (i.e. arthritis), to treat acne and other skin issues, toxic accumulation (especially in the liver and blood), excessive heat in the body, hormonal imbalance, and most Pitta disorders.

How to Use Tikta Ghrita

Take 1-2 Tbsp of Tikta Ghrita each morning on an empty stomach.  Mix this in 1/2 cup of warm water, stir until fully melted and then drink.  Begin this at least 3-5 days prior to the cleanse, and then continue daily until the cleanse is over.  After the cleanse, you can take 1 tsp of the Tikta Ghrita each morning for 7 days and then switch to a more rejuvenating medicine such as the Rasayana Ghrita (1 tsp, two times daily for 30 days post-cleanse).

2. For liver, blood, and skin health:

Take 1 tsp of Tikta Ghrita each morning on an empty stomach mixed and melted in 1/2 cup of warm water.  Take this dosage again mid-day for more chronic disorders and imbalances.

3. For daily health maintenance and detoxification:

Take 1 tsp of Tikta Ghrita each morning on an empty stomach mixed and melted in 1/2 cup of warm water.  Use consistently for best results.

For acute rashes, external hemorrhoids, and the treatment of skin disorders such as eczema and psoriasis, follow the recommendation in #2 while simultaneously using the Tikta Ghrita externally.  To use externally, take a dime to quarter size amount and apply to the effected area (make sure this area is clean) each night before bed.  For more extreme conditions, reapply in the morning after bathing as well. 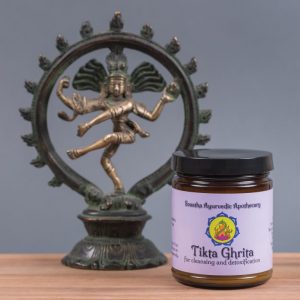